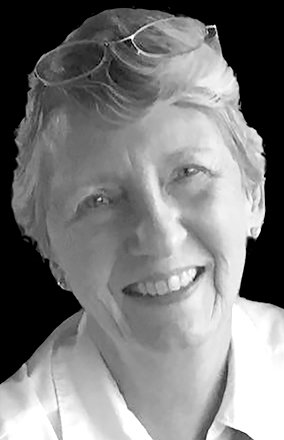 Janet Abel Hayes,  of Amelia Island, Florida, for 25 years, died peacefully in her sleep on the morning of Monday, Sept. 14, 2020, after a short illness.

She was born Nancy Janet Abel in Cleveland, on October 2, 1937, the only daughter and second child of Paul Aiken Abel and Nancy Maxwell Burton.
Janet was preceded in death by her parents; and her brother, Paul Burton Abel.

Janet’s childhood was spent in Cleveland, where she made many lifelong friends. She was a drum majorette and honor student, graduating from Bradley Central High School in 1955. Janet planned to attend the University of Tennessee, but at the last minute applied to and was accepted by Newcomb College, at that time the women’s college at Tulane University. She and one of her best friends arrived in New Orleans and enrolled at Newcomb in August 1955.

Within days Janet met her future husband, William Glenn Hayes, at a Kappa Sigma rush party. In early 1956 she accepted his fraternity pin. An engagement ring soon followed and they were married Aug. 24, 1956, in Cleveland’s Broad Street Methodist Church, shortly before he began medical school at Tulane. Children followed soon thereafter, the boys while he was still in school and Erin during the first year of his pediatric residency.

Janet mistakenly thought they would settle down and live in one place forever, even as they spent two years at Mountain Home Air Force Base in Idaho. They did settle in her home town for a while, but Bill decided to “return to school” as a radiology resident and pediatric radiology fellow. After three years in Cleveland, they were off to Prairie Village, Kansas, for three years and Birmingham, Ala., for two. Every place provided Janet with new friends. She raised three wonderful kids almost single-handedly while Bill spent long hours at the hospital and studying.

With Janet’s encouragement, Bill considered and accepted a radiology position in Charleston, West Virginia. By July 1973, they were West Virginians and Janet was adding more friends to her life list. Twenty-two wonderful years were spent in Charleston. There were many ski trips locally and to Colorado, Idaho, Wyoming and even Italy. Janet saw her children finish high school and leave the nest, scattering in multiple directions. So after Bill retired in 1992 a new chapter began.

In January 1995 Janet and Bill moved to a townhome on the beach on Amelia Island. When asked by her West Virginia friends, ”What if you don’t like it?”

Janet replied, “We will move again.” But leaving was never considered as Janet always referred to the island as “Paradise” as in her frequent, “It’s another beautiful day in Paradise.”

She enjoyed many new friends, continued her interests in cooking, knitting, contract bridge, church work, and keeping tabs on her far-flung friends, children and grandchildren. Of course, the beach attracted the children and grandchildren resulting in many family get-togethers. Janet and Bill took numerous trips over the years, including Israel, France, Italy, Germany, Holland, Belgium, Spain, Ireland, Mexico, and South and Central America including Buenos Aires, Machu Picchu. Cape Horn, and the Panama Canal.

Janet grew up in the Methodist Church, but after marriage joined the Episcopal Church in New Orleans where she was confirmed. She was a faithful member of Saint Peter’s Episcopal Church in Fernandina Beach. She completed the four-year course “Education for Ministry,” was on the Altar Guild for years, ushered, made cookies for events and funeral receptions, participated in Knitters for Christ, made covers for kneelers and was present for most church events.

In February 2006 Janet was found to have multiple myeloma and was started on chemotherapy, including a single large intravenous dose of melphalan followed shortly thereafter by a transfusion of her own previously collected stem cells. During all of this, she was courageous and upbeat. However, she noted some mental changes in the months following, and after doing a little research decided she had “chemo brain.” At first, it was a minor annoyance but after a time she lost interest in reading or going to movies. Eventually, she had to give up contract bridge. As her short-term memory worsened, it became obvious that she had progressive dementia. Unlike some others with dementia, she remained pleasant throughout the process. It was always, “Another beautiful day in Paradise.”

There will be a private burial service at the St. Peter’s Cemetery on her 83rd birthday, Oct. 2.